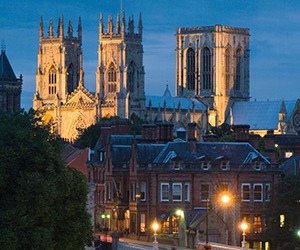 York’s new Culture Strategy, York’s Creative Future, will launch on 3 December at a virtual launch event, which brings together local and national voices, including creative practitioners, grassroots activists, and cultural leaders, to debate and discuss best-practice in and around culture in the city.

York’s Creative Future has inclusion and participation at its core, and the commitment to ensuring culture is relevant and accessible to everybody in York, regardless of age, background or postcode. It places culture at the heart of activities from major capital developments, to residents’ wellbeing and cultural entitlement for every child.

Key issues from the strategy, which will be discussed at the launch event, include cultural engagement and inclusion, how culture can support wellbeing, children and young people’s cultural entitlement, talent development and retention, culture and place, and York’s national and international profile.

The event is free to attend and places can be booked on Eventbrite here.

“We know that artists, arts organisations, museums and libraries change people’s lives for the better every day. And while the current pandemic means that we can’t be part of a live audience or participate in a creative activity as we usually would, it has been inspiring to see how the arts and cultural sector has rallied and found different ways to create and share content to lift people’s spirits during this difficult time. The Arts Council is doing everything we can to support the sector and ensure the survival of cultural and heritage organisations because we know how important creativity and culture are to the future wellbeing of the country and its communities.”

“Culture is an intrinsic part of people’s lives, as shown by the way that culture has provided a beacon of light, offering moments of joy and connectedness during the Covid19 lockdown. Cultural organisations in York have also worked together to develop a Culture Strategy that reflects practical aspirations to support people’s mental health and wellbeing and is already being delivered for example by jointly providing activities for children most in need across the city. York’s world-renowned cultural heritage, museums and attractions, will play a vital part in the city’s recovery from the impact of the pandemic.  By continuing to invest in York’s culture and creativity, the Culture Strategy aims for York also to be recognised as a centre for contemporary creativity with engaged and active participation in culture by its residents.”

“The music industry is a key part of our country’s cultural and economic fabric. It contributed £5.8 billion a year to the economy before Covid, supports almost 200,000 jobs, and brings huge educational and mental health benefits. It also plays a vital role in our communities and local economies. In 2019 alone, more than 700,000 music lovers travelled to the Yorkshire and Humber region for music events, spending £264 million in the local economy. The economic contribution of music is augmented by its huge cultural value which is just as important in the way it enriches all of our lives. I am confident that the music industry will be a key driving factor in the both UK’s economic and cultural regeneration as we emerge from the impact of Covid-19.”

The Culture Strategy was brought together through robust consultation and workshops with York’s residents, creative groups and cultural organisations. It has taken on board what matters most to the people who live, work and study in the city and transformed these views into a plan of action to grow and develop York’s creative future.

York’s Culture Strategy is a joint initiative and commitment between York’s Cultural Leaders Group*, City of York Council, and Make It York, the city’s destination management organisation, who lead on the strategy’s implementation.

“York’s Creative Future as a strategy is coming to fruition in a world that is very different from the one in which it was initially planned. It’s now more important than ever to come together and work together to put York’s cultural offer at the forefront of recovery, supporting communities across York and building on the city’s reputation worldwide. York is home to so many extraordinary and creative people, all of whom make this city such a vibrant place for culture and creativity, and I would like to thank all the residents and organisations across the city who contributed to the development of this exciting strategy.”

Helen Apsey, Head of Culture and Wellbeing at Make It York, said:

“York’s new Culture Strategy is a really ambitious and inclusive document. As a UNESCO Creative City, we have such a rich cultural offer in York, thanks to the work of our incredible creative practitioners, who have continued to innovate and find ways to create, share and inspire through their art, even during lockdown. The strategy really takes the best of what we are and our current cultural offer, and challenges us to make this accessible and relevant to everyone. Now we’re at the point of launching the strategy, I’m really excited to see how we take this forward together as a city, to ensure that culture can support people’s wellbeing and become a more integral part of our lives.”

The Culture Strategy is set to be the first step in the city’s ambition to enhance York’s wider wellbeing through culture. More details about York’s cultural transformation will be available from 3 December at makeityork.com/culture.

Any cookies that may not be particularly necessary for the website to function and is used specifically to collect user personal data via analytics, ads, other embedded contents are termed as non-necessary cookies. It is mandatory to procure user consent prior to running these cookies on your website.