As part of the launch of York’s Culture Strategy ‘York’s Creative Future’, through the Better Care Fund, Make It York and City of York Council awarded funding of more than £10,000 to seven social and cultural initiatives across the city – with the aim of easing loneliness, isolation and mental ill-health during the winter months.

The grants were set up in recognition of the impact the coronavirus pandemic has had on people’s wellbeing – through shielding, self-isolation and social distancing.

One project the grant scheme supported was ‘Interconnected: York’s Story Circle’ led by arts organisation Dandelion Arts. The intergenerational project set out to share the life stories of some of York’s amazing older residents – working with young people across the city to create interactive video content based on real interviews which were then shared in nine of York’s local care homes.

Full of memories, heart and song, the project focuses on bringing to life the stories of York residents – sharing their lives, memories and experiences. The first episode features Maureen’s story, who is an 80-year-old York resident, as she reminisces about growing up in the city in the 1940s and 50s. Maureen’s story was captured and turned into a monologue, which is then acted out by 24 year old student Annie. Talking points based on the story are also filmed with pupils from Fulford School and Vale of York School (12-15 year olds), so that care home residents can then reflect, reminisce and discuss the themes explored together.

Packs with reminiscence resources are also delivered to each care home to bring the stories to life and spark conversations. The packs include a range of interactive resources linked to the life stories being shared – from ration books and Terry’s Chocolate oranges to Blackpool rock, memorabilia, photos and more – all carefully curated with the aim to engage and inspire those taking part.

Katie Matthews Creative Director at Dandelion Arts said, “All life lessons come through stories, and this project has proved to be a really engaging way to bring together younger and older people across the city to share some of the fascinating stories of York residents. Raising the visibility of the elderly in the city and learning from them is incredibly important to us. Additionally we have found that this project goes some way to both reduce isolation and loneliness among older residents.

Feedback shows that for our care home residents the stories really help to light up a part of their life that may not have been shined on for some time – sparking opportunities to reminisce together and talk about their experiences. The young people have also gained a lot from being involved – learning new things and developing a form of creative mentorship.

We had already been running ‘I See You’, a project that took the stories of care home residents and made them into theatre performances with groups of local young people, but the grant from the Better Care Fund helped us to expand this concept, reaching more care homes across the city and developing the interactive video content and resource packs.

Our resource packs are carefully curated with the aim of capturing the imagination and triggering memories for discussion – and it’s been lovely to get out to deliver these to care homes across the city and build those relationships.

Thank you to the Better Care Fund for helping us to grow the project and to all the care home residents and young people who’ve gotten involved with such enthusiasm and passion over the last few months.”

The second episode launched at the end of March – focusing on Irene’s story, who at 99 is one of the oldest people involved in the project. Irene tells her story of living in Fulford – with Izzy (aged 15) acting out her experiences.

In addition to ‘Interconnected: York’s Story Circle’, Dandelion Arts are working on a number of other projects with opportunities for people in the city to get involved – including the ongoing ‘I See You’ project to bringing together young and old people to explore life stories through drama. ‘Community Smiles: Bigger Picture Project’, is also currently running in partnership with Local Area Coordinators to give individuals who may be suffering from anxiety or other mental health issues the opportunity to create bespoke pieces of art. The art is printed onto cards, given to school groups, and sent to residents in care homes across the city. 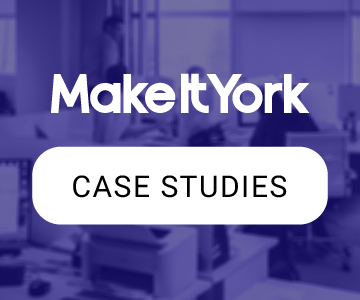 Starbons Limited is a bioscience company based at York Science Park’s Catalyst building which transforms waste into value-adding materials via a unique, patented process. The…